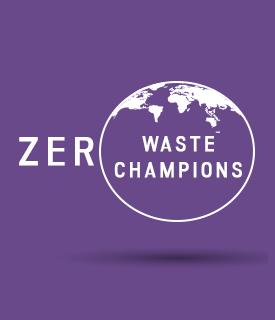 When a new property is constructed, tonnes of waste is generated which harms the environment as well as us and our future generations. However, when Lodha came up with their new ‘green’ property Lodha Palava in Dombivali, they wanted to change the thinking. Thus, together with us, they entered the third edition of Palava Tarang – a fun-filled family weekend event, aimed at driving footfalls to the property. This time, we suggested a zero waste event. We suggested to not just minimise the waste, but to reduce it to zero. The challenge was that Tarang was an event for people of all age groups, and to reduce littering and trash where kids are on loose with their laughter ringing through the area, is a task in itself. Also, telling older people to not create waste and throw it anywhere, without offending them, was also a challenge. For prospective buyers, Lodha Palava could be home, so we had activities to educate the guest on managing waste as they would in their own homes. We also had Zero waste marshals, methodical waste segregation and Zero waste champions. Eventually, we pulled off a zero waste event for 7000 people.

The main objective was to conduct an event which would bring families together and enable them to understand how Lodha Palava at Dombivali is the perfect place to have a home, despite it being away from the suburbs of Mumbai. We set out to create a zero waste event, and that was in no way a lesser goal. Our idea was to create an entertaining event with zero waste, so as to not only engage families by means of cultural activities, but also making them aware of social responsibilities as they indulged in an event that boasted cleanliness and zero waste. Palava was to be positioned as a green city away from the hustle and pollution of bustling cities.

We conducted a weekend-long engagement to position Lodha Palava at Dombivali as a ‘permanent weekend getaway’, to induce families to settle at this property. But importantly, we suggested doing it in a manner which produced zero waste, thus projecting the property as a green city slightly away from the pollution and chaos of city centres. We created sets keeping in mind the same. The biggest idea that we came up with was that of Zero Waste Champions, a title conferred on participants who were environmentally aware. We also came up with the concept of Zero Waste Marshalls who roamed around the venue as they educated those present on the concept of minimising waste and keeping the environment clean. There were also activities to educate children, with superstars of animation such as Chota Bheem making an appearance.

When too many people of varied age groups come together for a family event full of fun, it’s difficult to keep them in sync with a cause like cleanliness. After all, one cannot run after kids and adults alike, with a brochure of a movement which borders on boring. Hence, the challenge was to not only pull off the event without a glitch, but also conduct a social activity in a way it interests everyone; kids, adults, and even senior citizens.

All of this was done along with the main event which had two themes for children and adults, on two respective days. Additionally, we did face the hurdle of transporting food due to permission hiccups for the food trucks. Despite all that, we managed to not only conduct the event, but pulled off the ‘Zero Waste’ agenda as well, which left the attendees impressed. After all, everyone wants to live in a home with surroundings that are clean and imbued with pure air, something which is scarce in the main cities.

The following were the results of the event,

The event held at Lodha Palava Lakeshore Greens in Dombivali managed to attract a footfall of 7000, including the current residents. Not only this, more than 15000 people viewed the post event aftermovie on Facebook. The large-scale outdoor event was admired by all and sundry for its Zero Waste approach, something which is crucial in today’s world, when we should pay attention to the constant deterioration of our environment. As a result, more than 35% of active leads were generated, and out of those, nearly 15% gave appointments for discussions related to evaluation of the property, thus making this the highest sales conversion idea for a real estate brand. Feedback mails admiring the event too came our way. All in all we managed to pull off an activity which was not just a corporate social responsibility, but something the attendees related to as they could connect with the significance of it

Brands Who Trust Us